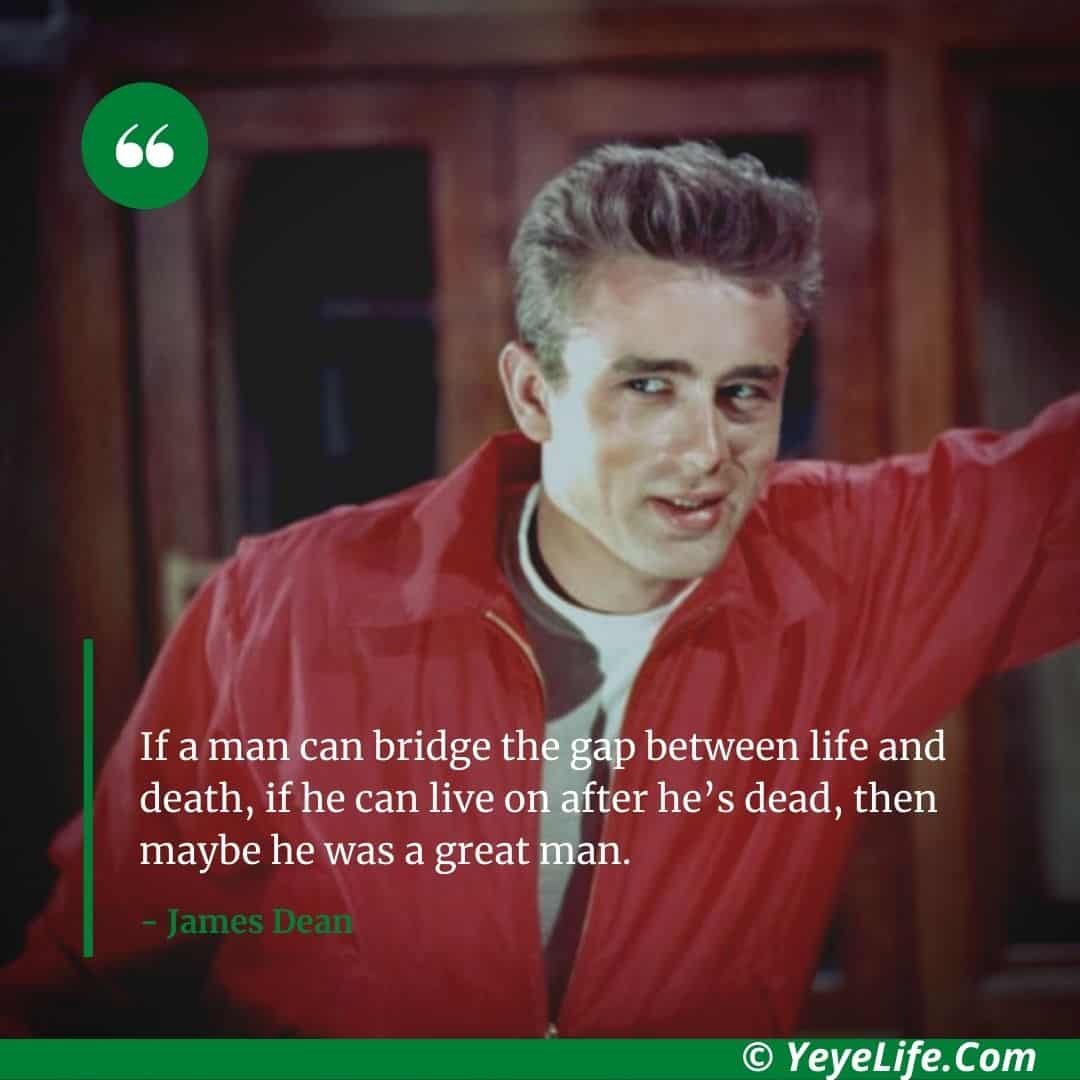 The gratification comes in the doing, not in the results. James Dean

There is no way to be truly great in this world. We are impaled on the crook of conditioning. A fish that is in the water has no choice that he is. Genius would have it that we swim in sand. We are fish and we drown. James Dean

I also became close to nature and am now able to appreciate the beauty with which this world is endowed. James Dean

Trust and belief are two prime considerations. You must not allow yourself to be opinionated. James Dean

Being a good actor isn’t easy. Being a man is even harder. I want to be both before I’m done. James Dean

I wouldn’t like me, if I had to be around me. James Dean

I’m not going to go through life with one arm tied behind my back. James Dean

My purpose in life does not include a hankering to charm society. James Dean

I don’t have to explain anything to anybody. James Dean

You try to be yourself, do only what you’ve always done and like to do, and right away, you’re tagged as an oddball. James Dean

I think the prime reason for existence, for living in this world is discovery. James Dean

Death can’t be considered because, if you’re afraid to die, there’s no room in your life to make discoveries. James Dean

If you’re not afraid, if you take everything you are, everything worthwhile in you and direct it at one goal, one ultimate mark, you’ve got to get there. James Dean

If I can keep this up and nothing interferes with my progress, one of these days I might be able to contribute something to the world. James Dean

If I had one day when I didn’t have to be all confused, and didn’t have to feel that I was ashamed of everything…if I felt that I belonged someplace, you know then… James Dean

The only greatness for man is immortality. James Dean

Studying cows, pigs and chickens can help an actor develop his character. There are a lot of things I learned from animals. One was that they couldn’t hiss or boo me. James Dean

To my way of thinking, an actor’s course is set even before he’s out of the cradle. James Dean

You never gave any of us an inch, ever, for what you thought was right. James Dean

You are who you are meant to be. Dance as if no one’s watching. Love as if it’s all you know. Dream as if you’ll live forever. Live as if you’ll die today. James Dean

Am I in love? Absolutely. I’m in love with ancient philosophers, foreign painters, classic authors, and musicians who have died long ago. I’m a passionate lover. I fawn over these people. I have given them my heart and my soul. The trouble is, I’m unable to love anyone tangible. I have sacrificed a physical bond, for a metaphysical relationship. I am the ultimate idealistic lover. James Dean

I am trying to find the courage to be tender in my life. I know violence is weakness. Only the gentle are ever really strong. James Dean

When an actor plays a scene exactly the way a director orders, it isn’t acting. It’s following instructions. Anyone with the physical qualifications can do that. James Dean

I used to fly around quite a bit, you know? I took a lot of unnecessary chances on the highways. And I started racing, and now I drive on the highways, I’m extra cautious because no one knows what they’re doing half the time. You don’t know what this guy is going to do or that one. James Dean

The only way to make a scene realistic is to do it the way you know it would really happen. James Dean

I think the one thing this picture shows that’s new is the psychological disproportion of the kids’ demands on the parents. Parents are often at fault, but the kids have some work to do, too. James Dean

I want to be a Texan 24 hours a day. James Dean

An actor should be judged by his performance only. James Dean

At times there seems to be a million ideas worth painting. However, there are days when it’s a challenge to pull any idea together. On these days I go to my studio, leaf through an art history book, and tell myself that I am part of this great tradition. James Dean

What do we need all that for? If a picture is psychologically motivated, if there is truth in the relationship in it, then I think that picture will do good. I firmly believe Rebel Without A Cause is such a picture. James Dean

An actor must interpret life, and in order to do so must be willing to accept all the experiences life has to offer. In fact, he must seek out more of life than life puts at his feet. James Dean

But you can’t show some far-off idyllic conception of behavior if you want the kids to come and see the picture. You’ve got to show what it’s really like and try to reach them on their own grounds. James Dean

You can do ‘Hamlet’ while performing cartwheels… as long as the audience sees your eyes – you can make the performance real. James Dean

The cinema is a very truthful medium because the camera doesn’t let you get away with anything. On stage, you can even loaf a little, if you’re so inclined. James Dean

The only thing I’ve seen so far are just raccoons running all over. James Dean

They do have a deer out here, but I haven’t seen it here. I just hope the deer (will be) alright. James Dean

It was an accident, although I’ve been involved in some kind of theatrical function or other since I was a child in school, music, athletics. To me, acting is the most logical way for people’s neuroses to manifest themselves, in this great need we all have to express ourselves. To my way of thinking, an actor’s course is set even before he’s out of the cradle. James Dean

Whatever’s inside making me what I am, it’s like film. Film only works in the dark. Tear it all open and let in the light and you kill it. James Dean

It’s a nice acting challenge for me because the character’s much older and he’s Jewish and he’s quite lonely. At first, he feels like his home is being invaded by this person and they have a few spats, but then he discovers the younger character is also Jewish and he grabs a hold of that. (Gardiner) has other secrets that at first tear us apart then bring us together at the end. James Dean

But I can’t go with you. Son, you drive too fast. James Dean

An hour or two of learning from the masters is usually enough to recharge my artistic batteries. James Dean

What better way to die? It’s fast and clean and you go out in a blaze of glory. James Dean

How can you measure acting in inches?!? James Dean

I’d rather have people hiss than yawn. James Dean

If zombies were made of bacon, I would only need a couple of fried eggs and a gallon of coffee, and the problem would basically solve itself. James Dean

I can’t let in the light. It will destroy my performance like light destroys film. James Dean

My fun days are over. James Dean

Take it easy driving– the life you save may be mine. James Dean

An actual right is something that governments need merely to secure, not to implement. James Dean

I’m a serious-minded and intense little devil, terribly gauche and so tense I don’t see how people stay in the same room with me. I know I wouldn’t tolerate myself. James Dean