Quotes From Actors and Actresses 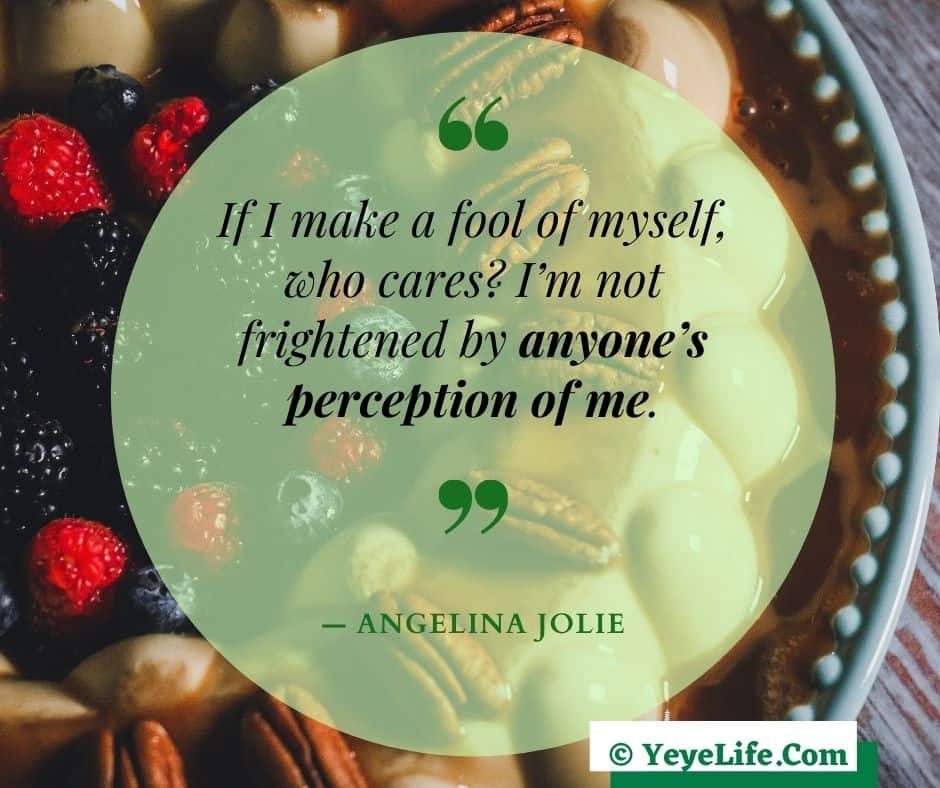 Always, always, always believe in yourself. Because if you don’t, then who will, sweetie? –  Marilyn Monroe

If all the circumstances of acting are made too easy, then there’s no grain of sand to make the pearl. – Peter Sarsgaard

I think if you live in a black-and-white world, you’re gonna suffer a lot. I used to be like that. But I don’t believe that anymore. – Bradley Cooper

There is still a lot to learn and there is always great stuff out there. Even mistakes can be wonderful. – Robin Williams

I don’t believe in happy endings, but I do believe in happy travels, because ultimately, you die at a very young age, or you live long enough to watch your friends die. It’s a mean thing, life. – George Clooney

Strength does not come from winning. Your struggles develop your strengths. When you go through hardships and decide not to surrender, that is strength. – Arnold Schwarzenegger

If you risk nothing, then you risk everything. – Geena Davis

Be nice to people on the way up, because you may meet them on the way down. – Jimmy Durante

Take a deep breath, pick yourself up, dust yourself off, and start all over again. – Frank Sinatra

From now on we live in a world where man has walked on the Moon. It’s not a miracle; we just decided to go. – Tom Hanks

My philosophy is: It’s none of my business what people say of me and think of me. I am what I am, and I do what I do. I expect nothing and accept everything. And it makes life so much easier. – Anthony Hopkins

I want to represent the idea that you really can make what you want … I believe I can create whatever I want to create. – Will Smith

Goals on the road to achievement cannot be achieved without discipline and consistency. – Denzel Washington

You’re only human. You live once and life is wonderful, so eat the damned red velvet cupcake. – Emma Stone

Giving voice to characters that have no other voice—that’s the great worth of what we do. – Meryl Streep

Sometimes you can have the smallest role in the smallest production and still have a big impact. – Neil Patrick Harris

You know, all that really matters is that the people you love are happy and healthy. Everything else is just sprinkles on the sundae. – Paul Walker

It’s important to say that the more challenging a scene is, in a way, the more fun it is because the more of my job I get to do. – Daniel Radcliffe

I don’t say: ‘can’t do that’, ‘won’t do that’. I’ve never thought in that way about work. The genuine truth, and I do think about this a lot, is that I’m one of the least competitive people you’ll ever meet. Except with myself. – Daniel Craig

For me, our job as artists is to serve the story, serve the director, and serve the fellow actors. And if you do that, by osmosis you’re serving yourself because you’ll get the best out of yourself. – David Oyelowo

Never worry about bad press: All that matters is if they spell your name right. – Kate Hudson

If I make a fool of myself, who cares? I’m not frightened by anyone’s perception of me. – Angelina Jolie

If you’re an actor, even a successful one, you’re still waiting for the phone to ring. – Kevin Bacon

Eventually stardom is going to go away from me. It goes away from everybody and all you have in the end is to be able to look back and like the choices you made. – Matt Damon

My thought process has always been, I’m excited to show you what my version of this story would look like. You’re going to be able to get a little condensed show. That took the pressure off getting the job – Tituss Burgess

I was made to be a perfectionist at everything I did. Everything was more important than what I wanted. – Dennis Quaid

Think of how stupid the average person is and realize half of them are stupider than that. – George Carlin

Without wonder and insight, acting is just a business. With it, it becomes creation. – Bette Davis

We are dying from overthinking. We are slowly killing ourselves by thinking about everything. Think. Think. Think. You can never trust the human mind anyway. It’s a death trap. – Anthony Hopkins

I think everybody should get rich and famous and do everything they ever dreamed of so they can see that it’s not the answer. – Jim Carrey

It doesn’t matter who you are. What matters is your plan. – Tom Hardy

If I am a cup maker, I’m interested in making the best cup I possibly can. My effort goes into that cup, not what people think about it. – Denzel Washington

We think too much and feel too little. – Charlie Chaplin

Respect your efforts, respect yourself. Self-respect leads to self-discipline. When you have both firmly under your belt, that’s real power. – Clint Eastwood

Sometimes you can’t see yourself clearly until you see yourself through the eyes of others. – Ellen DeGeneres

When you’re in a theater, it’s about reaching the back rows. When you have a camera in your face, it’s just about knowing the size of the room. – Corey Stoll

We all keep dreaming, and luckily, dreams really do come true. – Katie Holmes

This is your time and it feels normal to you, but really, there is no normal. There’s only change and resistance to it and then more change. – Meryl Streep

An actor is at most a poet and at least an entertainer. – Marlon Brando

Whatever art form you’re working in, it’s crucial to see it clearly, to feel it clearly, and not to worry about the results, or how someone else will see it. – Omar Epps

Everybody has something that chews them up and, for me, that thing was always loneliness. The cinema has the power to make you not feel lonely, even when you are. – Tom Hanks

A dame that knows the ropes isn’t likely to get tied up. – Mae West

I am just too much. – Bette Davis

Overcome the notion that you must be regular. It robs you of the chance to be extraordinary. – Uta Hagen

Enemies are so stimulating. – Katherine Hepburn

I’ve been through it all, baby, I’m mother courage. – Elizabeth Taylor

If you live a life of make-believe, your life isn’t worth anything until you do something that does challenge your reality. And to me, sailing the open ocean is a real challenge, because it’s life or death. – Morgan Freeman

When we live our lives every day, we’re met by opportunities, and most of us don’t even recognize them. – Scarlett Johansson

I’ve always approached things with hunger and just enough fear. Plenty of confidence, you know, but just enough fear to work extra hard. Paralyzing fear does nothing, but the kind of fear that makes you nervous enough to really be aware and focused? I like that kind of fear. – Queen Latifah

All you really have in the end are your stories. – Burt Reynolds

Learn to live your life—there’s no recipe for it. You can’t go to acting school to learn to be a deep person with a lot of experience to draw from; you can only become that person by feeling, by getting hurt, by feeling incredibly happy, by seeing the world; those are the things that make you richer as a person and give you a much bigger bank to draw from when you bring characters to life. – Pablo Schreiber

Here’s how I’ve lived my life: I’ve never been late to a set. I make films I believe in. I feel privileged to be able to do what I love. – Tom Cruise

If you’re the type of person who has to fulfill your dreams, you’ve gotta be resourceful to make sure you can do it. I came out to California when I was 21, thinking my New York credentials would take me all the way. I came back home a year later all dejected and a failure. – Vin Diesel

Why don’t they pass a constitutional amendment prohibiting anybody from learning anything? If it works as well as prohibition did, in five years we will have the smartest people on earth. – Will Rogers

I’m selfish, impatient and a little insecure. I make mistakes, I am out of control and at times hard to handle. But if you can’t handle me at my worst, then you sure as hell don’t deserve me at my best. – Marilyn Monroe

Things are never so bad they can’t be made worse. – Humphrey Bogart

Look at me and tell me if I don’t have Brazil in every curve of my body. – Carmen Miranda

As you grow older, you will discover that you have two hands, one for helping yourself, the other for helping others. – Audrey Hepburn

Every age can be enchanting, provided you live within it. – Brigitte Bardot

I’m not young. What’s wrong with that? – Vivien Leigh

I like to wake up each morning feeling a new man. – Jean Harlow

I was the shyest human ever invented, but I had a lion inside me that wouldn’t shut up. – Ingrid Bergman

It’s best not to stare at the sun during an eclipse. – Jeff Goldblum

Everything you see I owe to spaghetti. – Sophia Loren

A gentleman is simply a patient wolf. – Lana Turner

I don’t fear death because I don’t fear anything I don’t understand. When I start to think about it, I order a massage and it goes away. – Hedy Lamarr

Next time I see you, remind me not to talk to you. – Groucho Marx

He who has the gold makes the rules. – Tyler Perry

As a young man I prayed for success. Now I just pray to be worthy of it. – Brendan Fraser

I believe you make your day. You make your life. So much of it is all perception, and this is the form that I built for myself. I have to accept it and work within those compounds, and it’s up to me. – Brad Pitt

Eighty percent of success is showing up. – Woody Allen

The minute that you’re not learning I believe you’re dead. – Jack Nicholson

I care about the connection with the audience. Film is such a powerful medium. Movies can change the way people think. – Nicolas Cage

I’m not hungry for success. I am only hungry for good work, and that is how it is with most superstars. Every day I tell myself how fortunate I am to be where I am. – Akshay Kumar

There are no regrets in life. Just lessons. – Jennifer Aniston