If medical marijuana has been legal in your state long enough, you might forget that it’s not a universal situation.

Thus, as soon as you start packing your bags, the temptation may be high to put your pack of medical weed or some CBD edibles into the bag together with your swimsuit and sunglasses.

But will that pass at the customs? Or will you have trouble with the police trying to smuggle your medications through the border?

Here we uncover everything you need to know about traveling with weed or weed-derived products nationally and internationally. Study these tips carefully to avoid legal trouble and detention.

Traveling with Weed across the USA

Planning a journey from one U.S. state to another? Check the medical marijuana reciprocity laws that the state has.

The rules of buying and carrying a certain amount of weed differ from state to state, and some states don’t recognize the medical marijuana cards issued in other states.

Thus, you should do all the paperwork to understand whether you can carry your medical weed with proper documentation or whether you will need to buy weed upon arrival.

The U.S. weed legislation is a patchwork of regulations and laws at the state level, so you might find it hard to clarify what you can or can’t do as a state guest.

For instance, although legalizing medical weed use, Florida and New York don’t recognize the MMICs of other states and can prosecute state visitors detained with excessive weed amounts.

In Arkansas, you can buy and use weed as an eligible patient, but you should apply for the medical marijuana program one month before the state visit and pay a $50 fee for that privilege.

Thus, for instance, if you go to San Diego and can use your MMIC and find the best dispensary in San Diego to buy weed instead of taking the risks of carrying it through the border in your bag. 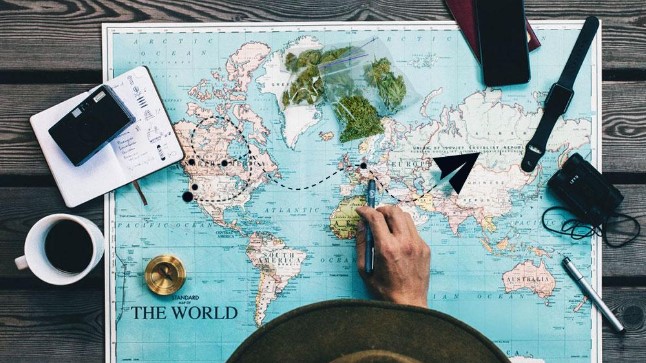 International travel with marijuana gets trickier than domestic trips, as crossing a border with weed in a bag may be challenging.

Besides, many countries have harsh criminal punishments for weed storage and use, as they don’t recognize medical weed use altogether.

Thus, we recommend not traveling with weed across the U.S. or Canadian border; even if the state to which you go is loyal to weed and has it legalized, it’s much safer to buy yourself some weed upon arrival.

A Cheat Sheet for a Medical Marijuana User

If you’re a regular medical marijuana user, you should keep these rules in mind whenever you plan a travel. Specific regulations apply to every mode of transportation and are mandatory for compliance (you are in big trouble if you’re caught violating them).

As you can see, travel with weed is a really problematic endeavor, both domestically and internationally.

Thus, it’s better to leave your weed stocks at home and take the medical marijuana card with you, hoping that the state or country of your destination has loyal weed purchase policies.

A much safer variant is to google the best dispensaries and purchase rules in advance; this way, you will avoid the frustration and have the remedy with you wherever you stay.

Hobbies to Undertake That Will Enrich Your Life

The Power of Pukhraj Stone

What Do You Need To Take Care Of Before Your Vacation?