Whether it’s from Starbucks, Lucerne or Kroger, the heavy whipping cream nutrition is basically the same.

Now before dipping your spoon to get the delicious taste of this cream, you may want to know its nutritional benefits and concerns asides from checking the label.

It will give you a knowledge of how much heavy whipping cream you should consume at each instance, and what is no longer considered healthy.

Don’t want to be carried away by its great taste or shy away from it entirely because it looks like a lot of calories to deal with?

Then here’s what you need to know about heavy whipping cream nutrition.

What is Heavy Whipping Cream? 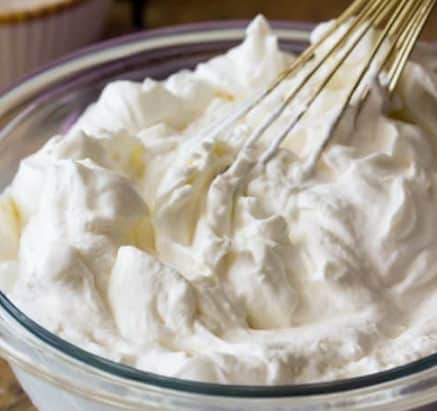 Heavy cream is gotten from raw dairy milk, however, it is the top layer portion of milk that is high in fat.

Raw milk usually consists of two parts and these are cream and milk.

The cream tends to rise to the top as a result of the fat it contains, thus, this part is skimmed and then processed.

On the other hand, heavy whipping cream has a delicious taste and as such, makes it a great topping for just about any meal.

Addictives such as carrageenan and sodium caseinate could sometimes be added to heavy whipping cream which brings about the cream’s stabilization and prevents the fat from separating.

Many types of heavy whipping cream also contain additives that help stabilize the cream and keep the fat from separating.

For this reason, there are differences in creams that are available in the market and they could be described by various names based on countries.

Whipped creams in the United States and the United Kingdom go by these names and their butterfat content are:

What is Heavy Whipping Cream Used For?

There are several uses of heavy whipping cream and the most common, is being eaten as it is.

However, it transcends over that to a number of uses it can be put to.

Some of these include its use in home cooking and food manufacturing.

Let’s take the latter, for instance, the whipping of cream makes its fat molecules to stick together.

On the same note, heavy whipping cream can be used for soups, coffee, baked goods, and so much more.

Can you use heavy whipping cream in coffee?

You must certainly can!

A number of people who are on a high-fat diet resort to whipping cream which can be included in their beverages and meals.

These aside, the specific uses of certain creams are:

Half and half consist of milk and cream and either of these is in equal parts.

Half and half can be used in coffee or on cereal and it’s fat constituent ranges between 10.5 percent and 18%.

Light cream or table cream can be used in coffee.

Heavy whipping cream is used for desserts or sauces.

Heavy whipping cream is high in saturated fat which can help to protect against heart disease.

In the same vein, it consists of vitamins A, D, E, and K, choline, and other beneficial minerals.

Vitamin A promotes the eye’s health and helps in immunity.

Choline, on the other hand, helps in brain developments and metabolism.

Phosphorus and calcium which are also some minerals in heavy whipping cream help the bones to grow.

Nevertheless, there is a clear difference between both.

These are types of creams that are identified based on their fact content.

For instance, heavy whipping cream has around 36% of milk fat.

This high milk fat enables it to produce a richer whipped cream.

Light whipping cream, on the contrary, has 30–35% milkfat which helps to produce an airier, fluffier whipped cream.

To that effect, which you settle for is determined by the characteristics you are out to get.

The benefits of heavy whipping cream lie in its nutrition facts.

With contents such as fat-soluble vitamins A, D, E, and K, it can be digested easily compared to vitamins in low-fat and fat-free foods.

Accordingly, some benefits of heavy whipping cream include:

A study of 1,300 participants revealed that those who consumed more full-fat dairy products were less likely to be obese in comparison with those who took less.

Thus, heavy whipping cream can reduce the risk of obesity.

The same can be said about diabetes and heart-related diseases.

The latter has been proven in a study which showed that 40% fat and full-fat dairy products were able to reduce high blood pressure.

Heavy cream has calcium that is beneficial to the muscular and central nervous system.

Muscle contraction can be stimulated with calcium intake.

It has been discovered that 65% of the world’s population find it difficult to digest lactose after infancy.

There are others who are extremely sensitive to lactose, and with whipping cream having lower lactose than milk, it can be beneficial for lactose intolerant individuals.

There is the 1/2 cup heavy whipping cream nutrition, on one hand, and the downsides, on the other.

1/2 cup contains 400 calories which could lead to excess consumption of calories if taken too much.

Also, many have pointed out that heavy whipping cream increases mucus production in asthmatics and even those who do not have respiratory issues.

Nonetheless, scientific evidence is yet to be linked to it, even though some people have testified of having lesser mucus production after staying away from certain dairy products.

Another potential concern is the risk of certain cancers through the intake of dairy products.

A study of 8,000 people, for instance, showed that those who took diary products more were 20% likely to have stomach cancer than those who didn’t.

The heavy whipping cream nutrition makes it beneficial to the body since it provides low-fat vitamins.

However, like everything else, it needs to be taken in moderation since there are downsides to consuming it in excess.

With that in mind, add it to your coffee, tea, cooking, etc. and the great taste will definitely incite your taste buds.

Excellent Self Care Habits To Develop In 2021

How To Treat Back Spasms With Simple Home Remedies

Corn on The Cob Calories

How Long Does Alcohol Stay In Your System