Grandkids Sayings: Grandchildren are indeed a blessing to their grandparents. The unconditional love and bond between grandparents and grandchildren is another sweet thing that can never be omitted when talking about grandkids and their grannies.

Spending time with grandkids can be funny and inspiring, it brings back old sweet memories from when you were of their age thousands of years ago. 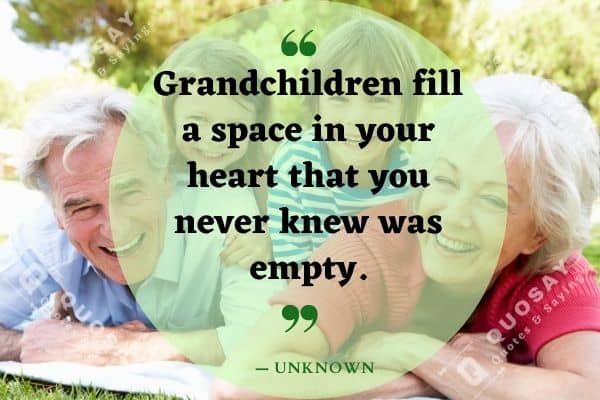 Being grandparents sufficiently removes us from the responsibilities so that we can be friends. – Allan Frome

“Grandchildren fill a space in your heart that you never knew was empty.” – Unknown

“Grandchildren are the dots that connect the lines from generation to generation.” – Lois Wyse

“Grandchildren: my favorite hello and my hardest goodbye.” – Unknown

“The simplest toy, one which even the youngest child can operate, is called a grandparent.” – Sam Levenson

“What children need the most are the essentials that grandparents provide in abundance. They give unconditional love, kindness, patience, humor, comfort, and lessons in life.” – Rudy Giuliani

“A grandchild is like a fine jewel set in an old ring.” – Anne Lamott

“I go to my grandchildren. They keep their grandpa informed on what’s going on.” – Ben Vereen

“What is it about grandparents that is so lovely? I’d like to say that grandparents are God’s gifts to children. And if they can but see, hear and feel what these people have to give, they can mature at a fast rate.” – Bill Cosby

“The only people interested in hearing about your grandchildren are other grandparents who want to tell you about theirs.” – Bryna Nelson Paston

“It is as grandmothers that our mothers come into the fullness of their grace.” – Christopher Morley

“The best babysitters, of course, are the baby’s grandparents. You feel completely comfortable entrusting your baby to them for long periods, which is why most grandparents flee to Florida.” – Dave Barry 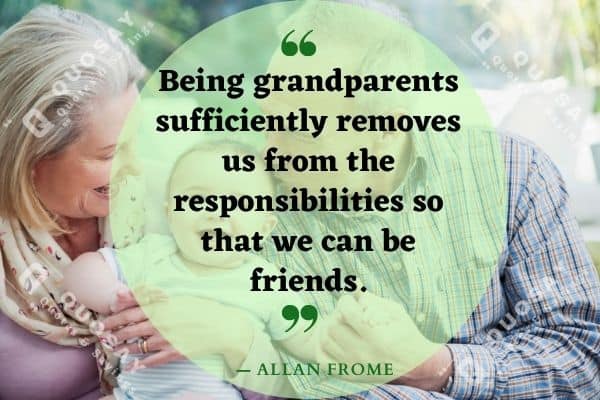 “Surely, two of the most satisfying experiences in life must be those of being a grandchild or a grandparent.” – Donald A. Norberg

“Few things are more satisfying than seeing your children have teenagers of their own.” – Doug Larson

“Just about the time a woman thinks her work is done, she becomes a grandmother.” – Edward H. Dreschnack

“My grandmother started walking five miles a day when she was sixty. She’s ninety-seven now, and we don’t know where the hell she is.” – Ellen DeGeneres

“There is no greater achievement than being a grandfather who tells fairy tales to grandchildren.” – Eraldo Banovac

“Uncles and aunts, and cousins, are all very well, and fathers and mothers are not to be despised; but a grandmother, at holiday time, is worth them all.” – Fanny Fern

“Do you know why grandchildren are always so full of energy? Because they suck it out of their grandparents.” – Gene Perret

“My grandkids believe I’m the oldest thing in the world. And after two or three hours with them, I believe it, too.” – Gene Perret

“Grandparents are there to help the child get into mischief they haven’t thought of yet.” – Gene Perret

“I like to do nice things for my grandchildren like buy them those toys I’ve always wanted to play with.” – Gene Perret

“Grandchildren: the only people who can get more out of you than the IRS.” – Gene Perret

“My grandmother is over eighty and still doesn’t need glasses. Drinks right out of the bottle.” – Henry Youngman

“You’ve got to do your own growing, no matter how tall your grandfather was.” – Irish Saying

“Young people need something stable to hang on to — a culture connection, a sense of their own past, a hope for their own future. Most of all, they need what grandparents can give them.” – Jay Kesler 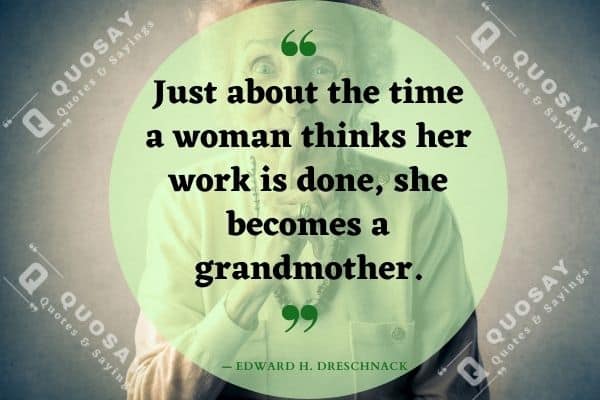 “A Grandmother thinks of her grandchildren day and night, even when they are not with her. She will always love them more than anyone would understand.” – Karen Gibbs

“With your own children, you love them immediately – and with grandchildren, it’s exactly the same.” – Kevin Whately

“Every generation revolt against its fathers and makes friends with its grandfathers.” – Lewis Mumford

“If God had intended us to follow recipes, He wouldn’t have given us grandmothers.” – Linda Henley

“Soon I will be an old, white-haired lady, into whose lap someone places a baby, saying, “Smile, Grandma!” — I, who myself so recently was photographed on my grandmother’s lap.” – Liv Ullmann

“A mother becomes a true grandmother the day she stops noticing the terrible things her children do because she is so enchanted with the wonderful things her grandchildren do.” – Lois Wyse

“Everyone needs to have access both to grandparents and grandchildren in order to be a full human being.” – Margaret Mead

“When grandparents enter the door, discipline flies out the window”. – Ogden Nash

“The grandchildren should not bear the debts of the grandparents.” – Nassim Nicholas Taleb

“Your sons weren’t made to like you. That’s what grandchildren are for.” – Jane Smiley

“Grandchildren are called ‘grand’ for a reason” – Unknown

“When my arms can’t reach my grandchildren, I hug them with my prayers.” – Unknown

“Distance will never decrease my love for my grandkids” – Unknown

“Grandchildren restore our zest for life, and our faith in humanity.” – unknown 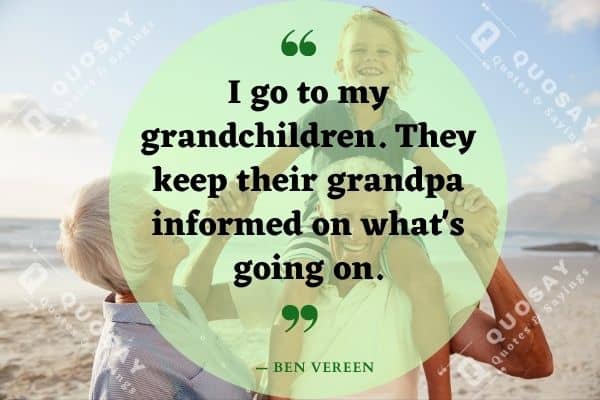 “The reason grandchildren and grandparents get along so well is that they have a common enemy.” – Sam Levenson

“Grandmas are moms with lots of frosting.” – Unknown

“What a bargain grandchildren are! I give them my loose change, and they give me a million dollars’ worth of pleasure.” – Gene Perret

“Perfect love sometimes does not come until the first grandchild.” – Welsh Proverb

“A child needs a grandparent, anybody’s grandparent, to grow a little more securely into an unfamiliar world.” – Charles and Ann Morse

“Our grandchildren accept us for ourselves, without rebuke or effort to change us, as no one in our entire lives has ever done, not our parents, siblings, spouses, friends — and hardly ever our own grown children.” – Ruth Goode

“I always give my grandkids a couple of quarters when they go home. It’s a bargain.” – Gene Perret

“Becoming a grandmother is wonderful. One moment you’re just a mother. The next you are all-wise and prehistoric.” – Pam Brown

“We should all have one person who knows how to bless us despite the evidence, Grandmother was that person to me.” – Phyllis Theroux

“Being grandparents sufficiently removes us from the responsibilities so that we can be friends.” – Allan Frome

“Surely, two of the most satisfying experiences in life must be those of being a grandchild or a grandparent.” – Donald A. Norberg

“Grandchildren don’t stay young forever, which is good because Pop-pops have only so many horsey rides in them.” – Gene Perret

“When grandparents enter the door, discipline flies out the window.” – Ogden Nash

“Uncles and aunts, and cousins, are all very well, and fathers and mothers are not to be despised; but a grandmother, at holiday time, is worth them all.” – Fanny Fern

“If I had known how wonderful it would be to have grandchildren, I’d have had them first.” – Lois Wyse

“My grandkids believe I’m the oldest thing in the world. And after two or three hours with them, I believe it, too.” – Gene Perret

“With your own children, you love them immediately – and with grandchildren, it’s exactly the same.” – Kevin Whately 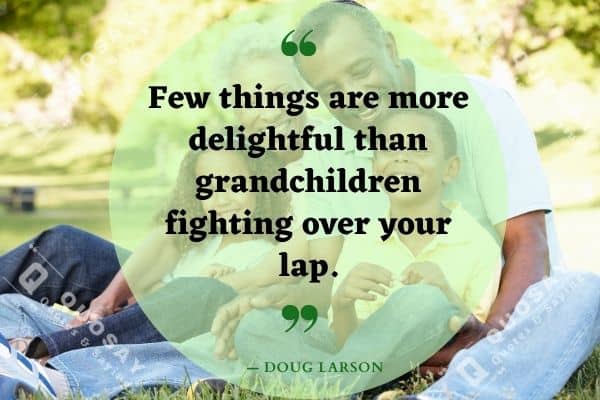 “Do you know why grandchildren are always so full of energy? They suck it out of their grandparents.” – Gene Perret

“Grandchildren are God’s way of compensating us for growing old.” – Mary H. Waldrip

“You do not really understand something unless you can explain it to your grandmother.” – Proverb

“Few things are more delightful than grandchildren fighting over your lap.” – Doug Larson

“The secret of life is to skip having children and go directly to grandchildren.” – Mel Lazarus

“They say genes skip generations. Maybe that is why grandparents find their grandchildren so likeable.” – Joan Mcintosh

“Grandchildren are loving reminders of what we’re really here for.” – Janet Lanese

When spending with your grandkids, you can use any of these sweet sayings for them, it may actually sound funny to them but as they grow older it will make meaning to them and you’re also indirectly leaving some sweet memories with them.

Hopefully, each of these grandchildren quotes resonate with you and help you to remember the love that a grandparent holds for a grandchild.

Which of these grandkids sayings and quotes was your favorite and how are you planning to use them, is it as an SMS to them, or will you just share it on social platforms like Facebook, Instagram, etc? Tell us using the comment section below.