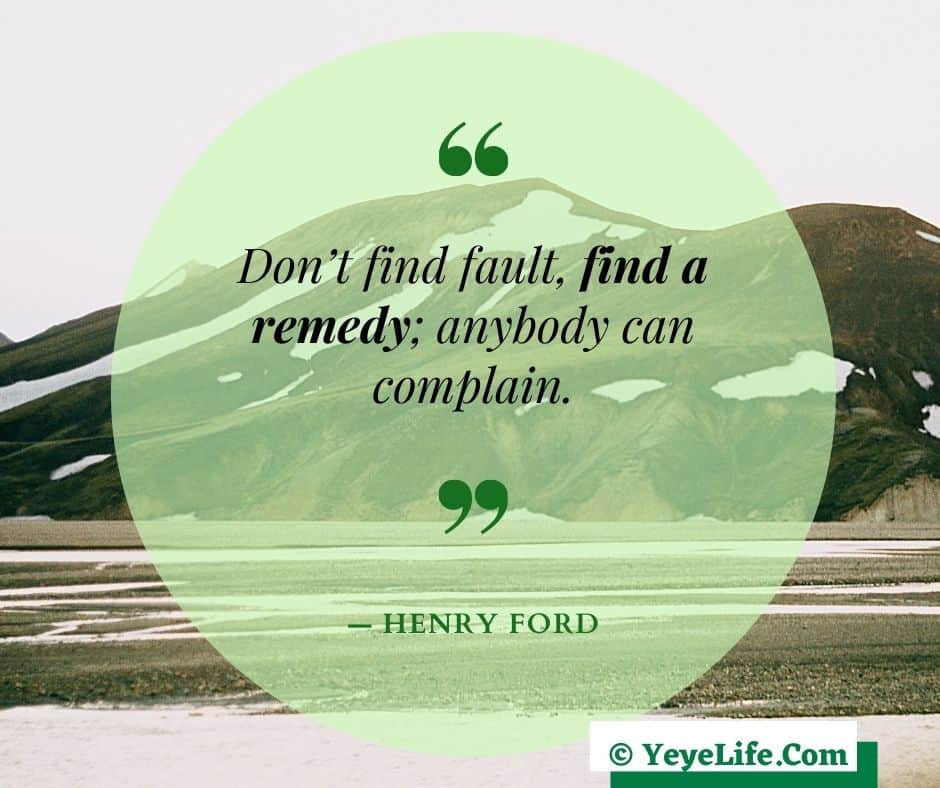 If there is anyone’s secret of success, it lies in the ability to get the other person’s point of view and see things from that person’s angle as well as from your own. ― Henry Ford

When everything seems to be going against you, remember that the airplane takes off against the wind, not with it. ― Henry Ford

Anyone who stops learning is old, whether at twenty or eighty. Anyone who keeps learning stays young. The greatest thing in life is to keep your mind young. ― Henry Ford

You can’t build a reputation on what you are going to do. ― Henry Ford

My best friend is the one who brings out the best in me. ― Henry Ford

If I had asked people what they wanted, they would have said faster horses. ― Henry Ford

Everything is in flux, and was meant to be. Life flows. We may live at the same number of the street, but it is never the same man who lives there. ― Henry Ford

Quality means doing it right when no one is looking. ― Henry Ford

Thinking is the hardest work there is, which is probably the reason why so few engage in it. ― Henry Ford

Obstacles are those frightful things you see when you take your eyes off your goals. ― Henry Ford

Most people spend more time and energy going around problems than in trying to solve them. ― Henry Ford

If everyone is moving forward together, then success takes care of itself. ― Henry Ford

It is well enough that people of the nation do not understand our banking and monetary system, for if they did, I believe there would be a revolution before tomorrow morning. ― Henry Ford

Any customer can have a car painted any color that he wants so long as it is black. ― Henry Ford

Chop your own wood and it will warm you twice. ― Henry Ford

Failure is only the opportunity more intelligently to begin again. ― Henry Ford

Life is a series of experiences, each one of which makes us bigger, even though sometimes it is hard to realize this. For the world was built to develop character, and we must learn that the setbacks and grieves which we endure help us in our marching onward. ― Henry Ford

Enthusiasm is the yeast that makes your hopes shine to the stars. Enthusiasm is the sparkle in your eyes, the swing in your gait. The grip of your hand, the irresistible surge of will and energy to execute your ideas. ― Henry Ford

It has been my observation that most people get ahead during the time that others waste. ― Henry Ford

Before everything else, getting ready is the secret of success. ― Henry Ford

Nothing is particularly hard if you divide it into small jobs. ― Henry Ford

One of the greatest discoveries a person makes, one of their great surprises, is to find they can do what they were afraid they couldn’t do. ― Henry Ford

A business absolutely devoted to service will have only one worry about profits. They will be embarrassingly large. ― Henry Ford

Most of the present acute troubles of the world arise out of taking on new ideas without first carefully investigating to discover if they are good ideas. ― Henry Ford

If money is your hope for independence, you will never have it. The only real security that a man can have in this world is a reserve of knowledge, experience and ability. ― Henry Ford

There is one rule for the industrialist and that is: Make the best quality of goods possible at the lowest cost possible, paying the highest wages possible. ― Henry Ford

The present order often clumsy often stupid has this advantage over any other. It works. Doubtless it will merge by degrees into another order and it will also work. But not so much as to what it is, but as into what men will bring into it. ― Henry Ford

Any man who thinks he can be happy and prosperous by letting the government take care of him better take a closer look at the American Indian. ― Henry Ford

A business that makes nothing but money is a poor business. ― Henry Ford

The end of money is not ease but the opportunity to perform more service. ― Henry Ford

You can’t learn in school what the world is going to do next year. ― Henry Ford

The problem with wise people. They always know what is wrong. So I never employ an expert in full bloom. ― Henry Ford

There is no man living who isn’t capable of doing more than he thinks he can do. ― Henry Ford

If you keep a record of all your failures, you will soon have a list of everything which cannot be done. ― Henry Ford

Whatever you have, you must either use or lose. ― Henry Ford

As we advance in life we learn the limits of our abilities. ― Henry Ford

I see no advantage in these new clocks. They run no faster than the ones made 100 years ago. ― Henry Ford

Whether you believe you can do a thing or not, you are right. ― Henry Ford

There are three things that grow more precious with age; old wood to burn, old books to read, and old friends to enjoy. ― Henry Ford

The only real security that a man can have in this world is a reserve of knowledge, experience and ability. ― Henry Ford

Even a mistake may turn out to be the one thing necessary to a worthwhile achievement. ― Henry Ford

Competition is the keen cutting edge of business, always shaving away at costs. ― Henry Ford

Everything comes to him who hustles while he waits. ― Henry Ford

There is joy in work. There is no happiness except in the realization that we have accomplished something. ― Henry Ford

Business is never so healthy as when, like a chicken, it must do a certain amount of scratching around for what it gets. ― Henry Ford

You don’t have to hold a position in order to be a leader. ― Henry Ford

Any color – so long as it’s black. ― Henry Ford

To do more for the world than the world does for you – that is success. ― Henry Ford

Genius is seldom recognized for what it is: a great capacity for hard work. ― Henry Ford

An idealist is a person who helps other people to be prosperous. ― Henry Ford

What’s right about America is that although we have a mess of problems, we have great capacity – intellect and resources – to do something about them. ― Henry Ford

I cannot discover that anyone knows enough to say definitely what is and what is not possible. ― Henry Ford

We try to pay a man what he is worth and we are not inclined to keep a man who is not worth more than the minimum wage. ― Henry Ford

There is no disgrace in honest failure; there is disgrace in fearing to fail. ― Henry Ford

Money is like an arm or leg- use it or lose it. ― Henry Ford

Givers have to set limits because takers rarely do. ― Henry Ford

To see a thing clearly in the mind makes it begin to take form. ― Henry Ford

I am looking for a lot of men who have and infinite capacity to not know what can’t be done. ― Henry Ford

New York is a different country. Maybe it ought to have a separate government. Everybody thinks differently, they just don’t know what the hell the rest of the United States is. ― Henry Ford

That the Devil finds work for idle hands to do is probably true. But there is a profound difference between leisure and idleness. ― Henry Ford

Experience is the thing of supreme value. ― Henry Ford

Do you want to know the cause of war? It is capitalism, greed, the dirty hunger for dollars. Take away the capitalist, and you will sweep war from the earth. ― Henry Ford

To teach that a comparatively few men are responsible for the greatest forward steps of mankind is the worst sort of nonsense. ― Henry Ford

It is not usual to speak of an employee as a partner, and yet what else is he? ― Henry Ford

The one aim of these financiers is world control by the creation of inextinguishable debt. ― Henry Ford

As we serve our jobs we serve the world. ― Henry Ford

History is more or less bunk. It’s tradition. We don’t want tradition. We want to live in the present and the only history that is worth a tinker’s dam is the history we made today. ― Henry Ford

Power and machinery, money and goods, are useful only as they set us free to live. ― Henry Ford

Edsel is the artist in our family. Art is something I know nothing about. ― Henry Ford

The natural thing to do is to work—to recognize that prosperity and happiness can be obtained only through honest effort. ― Henry Ford

Speculation into thing already produced that is not business. ― Henry Ford

That the earth produces, or is capable of producing, enough to give decent sustenance to everyone—not of food alone, but of everything else we need. For everything is produced from the earth. ― Henry Ford

Suppression of progress plays into the hands of the social enemy. Every advance in social justice establishes the nation. ― Henry Ford

If we had more justice, there would be less need of charity. ― Henry Ford

I think it should not be otherwise in industry. The men are there to get the greatest possible amount of work done and to receive the highest possible pay. If each man were permitted to act in his own way, production would suffer and therefore pay would suffer. Anyone who does not like to work in our way may always leave. ― Henry Ford

Poetry without music may be beautiful, but music gives poetry wings and elevates it into song. That may be the reason for our love of song-it has wings and lifts us; with proper songs, it is a nourishing spiritual exercise. ― Henry Ford

Public officials are all right if they stay in their proper sphere and perform their proper functions but when they get greedy for wider scope and more power and money they lose their value and become parasites. ― Henry Ford

The highest use of capital is not to make more money, but to make money do more service for the betterment of life. ― Henry Ford

We learn extra from our failures than from our successes. ― Henry Ford

If you need a machine and don’t buy it, then you will ultimately find that you have paid for it and don’t have it. ― Henry Ford