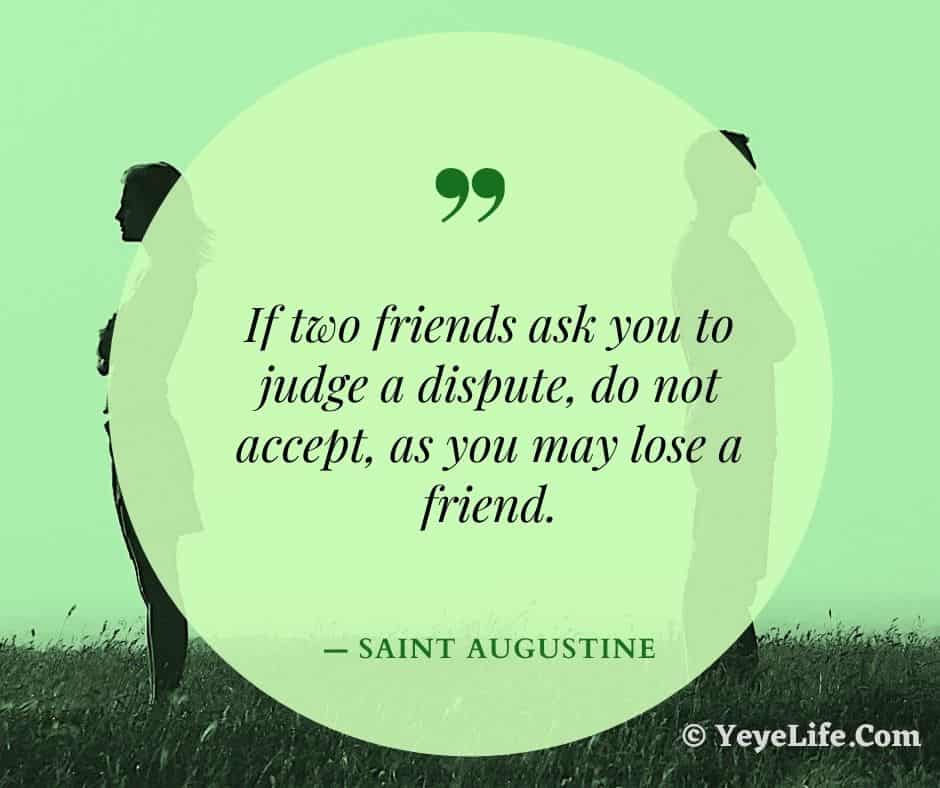 Friendship is delicate as a glass, once broken it can be fixed but there will always be cracks. — Waqar Ahmed

Your lost friends are not dead but gone before; advanced a stage or two upon that road which you must travel in the steps they trod. — Aristophanes

In the end, we will remember not the words of our enemies, but the silence of our friends. — Martin Luther King, Jr.

Sweet is the memory of distant friends! Like the mellow rays of the departing sun, it falls tenderly, yet sadly, on the heart. — Washington Irving

The worst pain in the world goes beyond the physical. Even further beyond any other emotional pain one can feel. It is the betrayal of a friend. — Heather Brewer

While we are mourning the loss of our friend, others are rejoicing to meet him behind the veil. — John Taylor

No person is your friend who demands your silence or denies your right to grow. — Alice Walker

But fate ordains that dearest friends must part. — Edward Young

Death leaves a heartache no one can heal, love leaves a memory no one can steal. — Richard Puz

Good God! How often are we to die before we go quite off this stage? In every friend we lose a part of ourselves, and the best part. — Alexander Pope

Can miles truly separate you from friends… If you want to be with someone you love, aren’t you already there? — Richard Bach

If two friends ask you to judge a dispute, do not accept, as you may lose a friend. — Saint Augustine

Some people aren’t loyal to you. They are loyal to their needs of you. Once their needs change, so does their loyalty.

Excuse me, then! you know my heart; But dearest friends, alas! must part. — John Gay

Due to success I started losing friends. — Ace Hood

If you should die before me, ask if you can bring a friend. — Stone Temple Pilots

Don’t be dismayed at goodbyes. A farewell is necessary before you can meet again. And meeting again, after moments or lifetime, is certain for those who are friends. — Richard Bach

On the death of a friend, we should consider that the fates through confidence have devolved on us the task of a double living, that we have henceforth to fulfill the promise of our friend’s life also, in our own, to the world. — Henry David Thoreau

The deep pain that is felt at the death of every friendly soul arises from the feeling that there is in every individual something which is inexpressible, peculiar to him alone, and is, therefore, absolutely and irretrievably lost. — Arthur Schopenhauer

The death of a friend is equivalent to the loss of a limb. — German Proverb

I pray to God to remove my enemies from my life, and before I know it, I started losing friends. Am just saying no one to be trusted. — Blaze Olamiday

You meet people who forget you. You forget people you meet. But sometimes you meet those people you can’t forget. Those are your friends.

It takes a minute to find a special person, an hour to appreciate them, and a day to love them, but it takes an entire lifetime to forget them.

Friendship means understanding, not agreement. It means forgiveness, not forgetting. It means the memories last, even if contact is lost.

When our friends are alive, we see the good qualities they lack; dead, we remember only those they possessed. — Jean Antoine Petit-Senn

Lovers have a right to betray you friends don’t. — Judy Holliday

A friendship that can cease has never been real. — St. Jerome

No distance of place or lapse of time can lessen the friendship of those who are thoroughly persuaded of each other’s worth. — Robert Southey

Though friendship is not quick to burn, it is explosive stuff. — May Sarton

The difficulty is not so great to die for a friend, as to find a friend worth dying for. — Homer

To lose a friend is the greatest of all losses.

I had a friend who was a clown. When he died, all his friends went to the funeral in one car. — Steven Wright

Goodbye, goodbye, I hate the word. Solitude has long since turned brown and withered, sitting bitter in my mouth and heavy in my veins. — R. M. Grenon

It is far better to be alone, than to be in bad company. — George Washington

I have learned that no matter how good a friend is, they’re going to hurt you every once in a while, and you must forgive them for that.

Breaking with old friends is one of the most painful of the changes in all that piling up of a multitude of small distasteful changes that constitutes growing older. — John Dos Passos

True friendship is like sound health; the value of it is seldom known until it is lost. — Charles Caleb Colton

Make as many friends as you can, but don’t build your life on them alone. It’s an unstable foundation.

Distance of time and place generally cure what they seem to aggravate; and taking leave of our friends resembles taking leave of the world, of which it has been said, that it is not death, but dying, which is terrible. — Henry Fielding

A man of many companions may come to ruin, but there is a friend who sticks closer than a brother. — Proverbs 18:24

The bond between friends cannot be broken by chance; no interval of time or space can destroy it. Not even death itself can part true friends. — St. John Cassian

When one has lost a friend one’s eyes should be neither dry nor streaming. Tears, yes, there should be, but not lamentation. — Seneca

It’s hard to tell who has your back, from who has it long enough just to stab you in it’. — Nicole Richie

When we honestly ask ourselves which person in our lives means the most to us, we often find that it is those who, instead of giving advice, solutions, or cures, have chosen rather to share our pain and touch our wounds with a warm and tender hand. The friend who can be silent with us in a moment of despair or confusion, who can stay with us in an hour of grief and bereavement, who can tolerate not knowing, not curing, not healing and face with us the reality of our powerlessness, that is a friend who cares. — Henri J.M. Nouwen

We all lose friends… we lose them in death, to distance and over time. But even though they may be lost, hope is not. The key is to keep them in your heart, and when the time is right, you can pick up the friendship right where you left off. Even the lost find their way home when you leave the light on. — Amy Marie Walz

It is more shameful to distrust our friends than to be deceived by them. — Confucius

False friends are like our shadow, keeping close to us while we walk in the sunshine, but leaving us the instant we cross into the shade. — Christian Nestell Bovee

Death is but crossing the world, as friends do the seas; they live in one another still. For they must be present, that love and live in that which is omnipresent. In this divine glass, they see face to face, and their converse is free as well as pure. This is the comfort of friends, that though they may be said to die, yet their friendship and society are, in the best sense, ever present, because immortal. — William Penn

No one is really busy. It all depends on what number you are on their priority list.

Friendship must never be buried under the weight of misunderstanding. — Sri Chinmoy

Don’t feel sad over someone who gave up on you, feel sorry for them because they gave up on someone who would have never given up on them. — Frank Ocean

A good friend is hard to find, hard to lose, and hard to forget.

Friendship is like a glass ornament, once it is broken, it can rarely be put back together in exactly the same way. — Charles Kingsley

The worst solitude is to be destitute of sincere friendship. — Sir Francis Bacon

Oh, my bad. I’m sorry for bothering you. I forgot I only exist when you need me for something.

Sometimes life is hard to bear, when a friend is just not there.

The most beautiful discovery true friends make is that they can grow separately without growing apart. — Elizabeth Foley

Sometimes the measure of friendship isn’t your ability to not harm but your capacity to forgive the things done to you and ask forgiveness for your own mistakes. — Randy K. Milholland

I’d rather have no friends than fake ones.

Because once upon a time, we were best friends. And, yes, there’s been a lot of bad stuff in between. But none of that matters right now, okay? You need me, I’m there. Any time, any place, anywhere — Dawsons’ Creek

True regret is knowing you missed your only opportunity to be simply a good friend to someone that was exactly like you. — Shannon L. Alder

On a day of burial there is no perspective—for space itself is annihilated. Your dead friend is still a fragmentary being. The day you bury him is a day of chores and crowds, of hands false or true to be shaken, of the immediate cares of mourning. The dead friend will not really die until tomorrow, when silence is ’round you again. Then he will show himself complete, as he was—to tear himself away, as he was, from the substantial you. Only then will you cry out because of him who is leaving and whom you cannot detain. — Antoine de Saint-Exupéry

Somebody asked me if I knew you. A million memories flash through my mind, but I just smiled and said I used to.

A special friend is hard to find, hard to lose and impossible to forget.

Sometimes your closest friend is your greatest enemy. — Jason Fong

We are neither on good terms or bad. We are no longer anything.

Some people are going to leave, but that’s not the end your story. That’s the end of their part in your story.