How Can You Assist an Alcoholic Who Refuses Help?

What to Do if You’re Losing Your Hearing

Scar Quotes From Lion King: Scar is the main antagonist in Disney’s The Lion King franchise. He was created in 1989 by screenwriters Irene Mecchi, Jonathan Roberts, and Linda Woolverton, and animated by Andreas Deja. The Pride Lands’ reclusive heir presumptive, Scar is introduced in the first film as Simba’s uncle and Mufasa’s younger brother.¹ 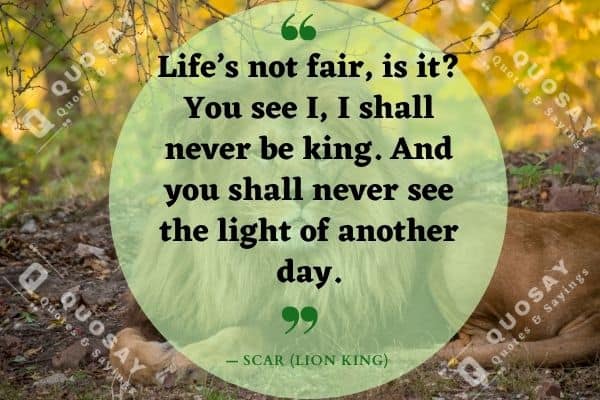 “Life’s not fair, is it? You see I, I shall never be king. And you shall never see the light of another day.” (a quote when scar kills Mufasa)

“Now look, Zazu, you’ve made me lose my lunch.”

“Why, if it isn’t my big brother descending from on high to mingle with the commoners.”

“Well I was first in line, until the little hairball was born.”

“Oh, I shall practice my curtsy.”

“Oh no, Mufasa. Perhaps you shouldn’t turn your back on me.” 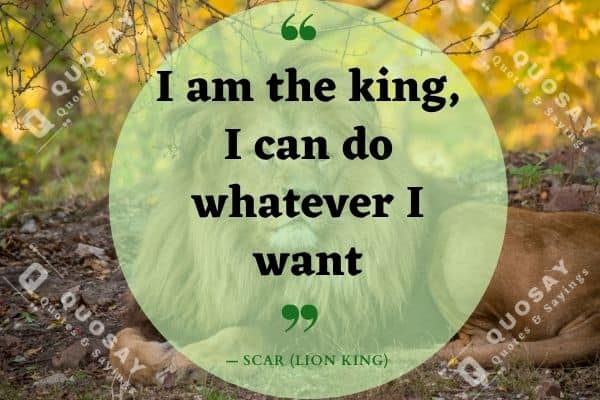 “Temper, temper. I wouldn’t dream of challenging you. Well, as far as brains go, I got the lion’s share. But when it comes to brute strength, I’m afraid I’m at the shallow end of the gene pool.”

“Well forgive me for not leaping for joy. Bad back, you know.”

“Simba, Simba. I’m only looking out for the wellbeing of my favorite nephew.”

“Oh dear, I’ve said too much. Well I supposed you’d have found out sooner or later. You being so clever and all. Just do me one favor. Promise me you’ll never visit that dreadful place.”

“Surely we lions are not all that bad?” 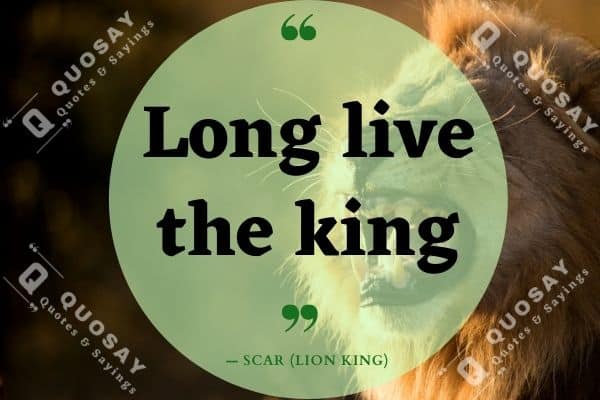 “Just between us, you might want to work on that little roar of yours.”

“Long live the king.” (a quote when scar kills Mufasa)

“Oh, Zazu, do lighten up. Sing something with a little bounce in it!”

“You know the law. Never, ever mention that name in my presence. I am the king!”

“Simba, I’m a little surprised to see you … alive.” 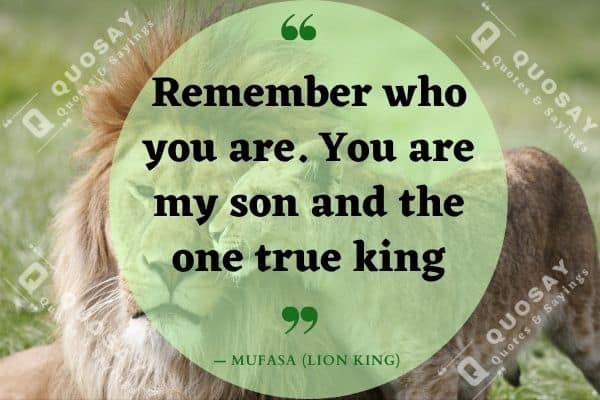 “Oh yes, the past can hurt. But from the way I see it, you can either run from it, or learn from it.” – Rafiki

“Everything you see exists together in a delicate balance. As king, you need to understand that balance and respect all the creatures, from the crawling ant to the leaping antelope.” – Mufasa

“Well, somebody once told me that the great kings of the past are up there, watching over us.” – Simba

“Remember who you are. You are my son and the one true king.” – Mufasa

“I’m only brave when I have to be. Being brave doesn’t mean you go looking for trouble.” – Mufasa

“Danger? Hah! I walk on the wild side. I laugh in the face of danger.” – Simba

“You gotta put your past behind ya. Look kid, bad things happen, and you can’t do anything about it, right?” – Timon

“I just wanted to show you I could do it. That I could be brave like you.” – Young Simba

“See, I told you having a lion on our side wasn’t such a bad idea.” – Timon

“When we die, our bodies become the grass, and the antelope eat the grass. And so, we are all connected in the great Circle of Life…” – Mufasa

“Everything the light touches is our kingdom.” –Mufasa

“The question is, who are you?” – Rafiki

“Bad things happen, and you can’t do anything about them.” – Timon

“There’s more to being a king than getting your way all the time.” – Mufasa

Scar quotes from the Lion King contain a lot of life lessons that’s why we have taken time to curate his top speech and quotes ranging from “life’s not fair” to “long live the king” (quote when scar kills Mufasa) and so on.

So, what do you think? Is Scar as witty as he is evil? Personally, I think scar was good with speech 😂🤣

The Differences And Similarities Between Assisted Living And Memory Care

What to Gift a Friend From College

Is There A Cure For HIV/AIDS?