Our last words quotes, on the other hand, will give you wise sayings that have the term ‘last word’ or phrases that were said last before a famous person’s demise.

You’ll find heartbreaking last words, last words to someone they loved, and so much more.

Hence, if you’re preparing a speech, essay, or generally, looking to expand your knowledge, let’s get you started.

‘Strike the last word’ is not really a common phrase in English.

However, it means asking for an immediate turn to speak for five minutes.

An example is the use of this phrase for the two proposed articles of impeachment against former U.S.President Donald Trump.

Specifically, the phrase ‘I move to strike the last word’ was stated every so often and it provided members an opportunity to speak for five minutes.

Thus, it gave members more time to debate on an amendment. 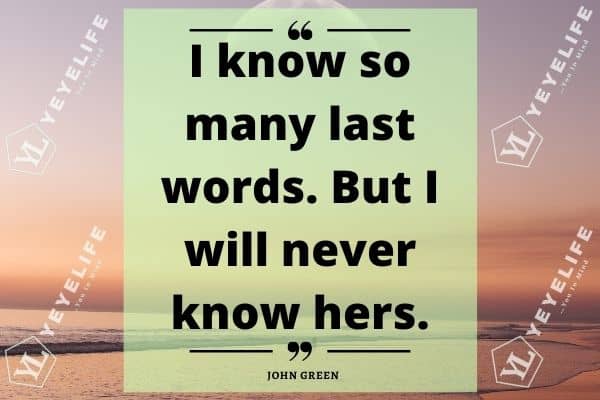 “Francois Rabelais. He was a poet. And his last words were “I go to seek a Great Perhaps.” That’s why I’m going. So I don’t have to wait until I die to start seeking a Great Perhaps.”
― John Green, Looking for Alaska

“I go to seek a Great Perhaps.”
― François Rabelais

“I found myself thinking about President William McKinley, the third American president to be assassinated. He lived for several days after he was shot, and towards the end, his wife started crying and screaming, “I want to go too! I want to go too!” And with his last measure of strength, McKinley turned to her and spoke his last words: “We are all going.”
― John Green, Looking for Alaska

“The last words Albus Dumbledore spoke to the pair of us?’
Harry is the best hope we have. Trust him.”
― J.K. Rowling, Harry Potter and the Deathly Hallows

“I know so many last words. But I will never know hers.”
― John Green, Looking for Alaska

“I am sorry too,” said Lupin. “Sorry I will never know [my son]… but he will know why I died and I hope he will understand I was trying to make a world in which he could live a happier life.”
― J.K. Rowling, Harry Potter and the Deathly Hallows

“This wallpaper is dreadful, one of us will have to go.”
― Oscar Wilde

(Applaud, my friends, the comedy is over.)

“The Angel blade burns you, just as God’s name chokes you,” said Valentine, his cool voice sharp as crystal. “They say that those who die upon its point will achieve the gates of heaven. In which case, revenant, I am doing you a favor.” He lowered the blade so that the tip touched Simon’s throat. Valentine’s eyes were the color of black water and there was nothing in them: no anger, no compassion, not even any hate. They were empty as a hollowed-out grave. “Any last words?”
Simon knew what he was supposed to say. Sh’ma Yisrael, adonai elohanu, adonai echod. Hear, oh Israel, the Lord our God, the Lord is One. He tried to speak the words, but a searing pain burned his throat.
“Clary,” he whispered instead.”
― Cassandra Clare, City of Ashes

“Last words are always harder to remember when no one knows that someone’s about to die.”
― John Green, Looking for Alaska

“Go on, get out! Last words are for fools who haven’t said enough!”
― Karl Marx

“I have offended God and mankind because my work didn’t reach the quality it should have.”
― Leonardo Da Vinci

“I must go in, the fog is rising.”
― Emily Dickinson

“Good-bye. I am leaving because I am bored.”
― George Sanders

“All was well.”
― J.K. Rowling, Harry Potter and the Deathly Hallows

“Why do you weep? Did you think I was immortal?”
― Louis XIV

“Maybe you who condemn me are in greater fear than I who am condemned.”
― Giordano Bruno

“Stay with me to-night; you must see me die. I have long had the taste of death on my tongue, I smell death, and who will stand by my Constanze, if you do not stay?”
― Wolfgang Amadeus Mozart

“Be natural my children. For the writer that is natural has fulfilled all the rules of art.”

“Nineteenth-century preacher Henry Ward Beecher’s last words were “Now comes the mystery.” The poet Dylan Thomas, who liked a good drink at least as much as Alaska, said, “I’ve had eighteen straight whiskeys. I do believe that’s a record,” before dying. Alaska’s favorite was playwright Eugene O’Neill: “Born in a hotel room, and–God damn it–died in a hotel room.” Even car-accident victims sometimes have time for last words. Princess Diana said, “Oh God. What’s happened?” Movie star James Dean said, “They’ve got to see us,” just before slamming his Porsche into another car. I know so many last words. But I will never know hers.”
― John Green, Looking for Alaska

“And they always slept better with blades beneath their beds.”
― Cinda Williams Chima, The Warrior Heir

“Don’t let it end like this. Tell them I said something.”
― Pancho Villa

“As death, when we come to consider it closely, is the true goal of our existence, I have formed during the last few years such close relationships with this best and truest friend of mankind that death’s image is not only no longer terrifying to me, but is indeed very soothing and consoling.”
― Wolfgang Amadeus Mozart

“It was an indulgence, learning last words. Other people had chocolate; I had dying declarations.”
― John Green, Looking for Alaska 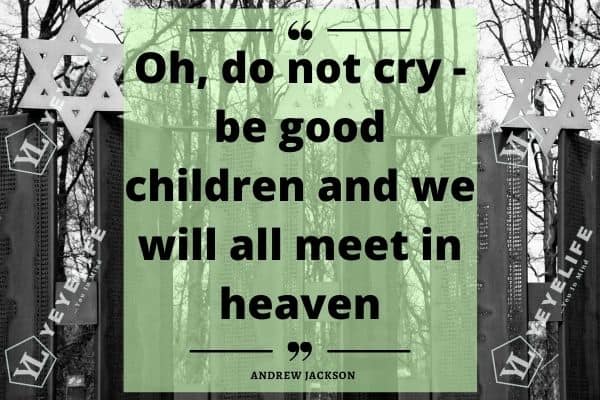 Erich Segal
“Now would you do me a favor?’ From somewhere inside me came this devastating assault to make me cry. But I withstood. I would not cry. I would merely indicate to Jennifer – by the affirmative nodding of my head – that I would be happy to do her any favor whatsoever.
‘Would you please hold me very tight?’ she asked.
I put my hand on her forearm – Christ, so thin – and gave it a little squeeze.
‘No, Oliver,’ she said, ‘really hold me. Next to me.’I was very, very careful – of the tubes and things – as I got onto the bed with her and put my arms around her.
‘Thanks, Ollie.’
Those were her last words.”
― Erich Segal, Love Story

“Just take me with you. Please.
I cant.
Please, Papa.
I cant. I cant hold my son dead in my arms. I thought I could but I cant.”
― Cormac McCarthy, The Road

“Oh, do not cry – be good children and we will all meet in heaven.”
― Andrew Jackson

“Is it the Fourth?”
― Thomas Jefferson

“When I die, I would love to die smiling. If however I forget this, I hope I have someone there to make me smile.”
― Fafore

“Top question of the dying: “What made me sick?”
― Steven Magee

“Death is the great equalizer of human beings. Death is the boundary that we need to measure the precious texture of our lives. All people owe a death. There is no use vexing about inevitable degeneration and death because far greater people than me succumbed to death’s endless sleep without living as many years as me.”
― Kilroy J. Oldster, Dead Toad Scrolls

“It is a dreadful thing to wait and watch for the approach of death; to know that hope is gone, and recovery impossible; and to sit and count the dreary hours through long, long, nights – such nights as only watchers by the bed of sickness know. It chills the blood to hear the dearest secrets of the heart, the pent-up, hidden secrets of many years, poured forth by the unconscious helpless being before you; and to think how little the reserve, and cunning of a whole life will avail, when fever and delirium tear off the mask at last. Strange tales have been told in the wanderings of dying men; tales so full of guilt and crime, that those who stood by the sick person’s couch have fled in horror and affright, lest they should be scared to madness by what they heard and saw; and many a wretch has died alone, raving of deeds, the very name of which, has driven the boldest man away.

“Jakie, is it my birthday or am I dying?” (Seeing all her children assembled at her bedside in her last illness.)”
― Nancy Astor the Viscountess Astor

“What will be your death note?”
― Lailah Gifty Akita, Pearls of Wisdom: Great mind

“I looked at her, exhausted in the hospital bed, and she looked at you, and you looked at me looking at her with eyes that had never known anything else, and for a moment there I swear we saw each other with a clarity that nothing can alter, not time, not heartbreak, not death.”
― Garth Risk Hallberg

“Don’t wait for the last hour of life; to do the things you wish to do.”
― Lailah Gifty Akita, Pearls of Wisdom: Great mind

“Do I have anything to lose? This life will be gone one day to the Creator who gave it.”
― Lailah Gifty Akita, Pearls of Wisdom: Great mind

“Life has an end. We are all on a transit.”
― Lailah Gifty Akita, Pearls of Wisdom: Great mind

“In the world you live in, one day you will be gone but you must fulfill your mission before departure.”
― Lailah Gifty Akita, Think Great: Be Great!

“In the vast spectrum of space-time’s coeternal continuum, I am but a glint of bundled energy held together by the translucent fiber of creative consciousness. The misty dew of private thoughts that inhabit my streaky underworld briefly forms a splintery part of the glittering arena of the cosmos. In the ether-like dawn of my awakening, my minuscule arch appears intravenously injected amid the dark matter of the nightscape. Reminiscent of the morning’s dew, my comet’s tailed reflection disintegrates and dissipates without a lasting trace in the dawn of a new age. I shall never wholly cease to exist, since my filtrate potentiality – a trace of my essence – remains suspended forevermore in celestial wonderment.”
― Kilroy J. Oldster, Dead Toad Scrolls

“She died in hospital, eight months after she was diagnosed and treated for Hodgkin’s disease, a cancer of the lymph nodes. For a week before that, she asked me to read aloud her favourite poems. She listened, her eyes closed. Now and then she repeated a line softly to herself. That fateful day, as I sat at her bedside, she asked me to read from a volume of Christina Rossetti’s poems. As I read, she opened her eyes, smiled and said, clearly and distinctly, ‘And if thou wilt, remember, and if thou wilt, forget.’
Those were her last words.”
― Poile Sengupta, Inga

Now that you know strike the last word meaning, you can take full advantage of it.

You can also make the most of the quotes about having the last word.