150+ Top and Most Famous Drinking Quotes of All Time 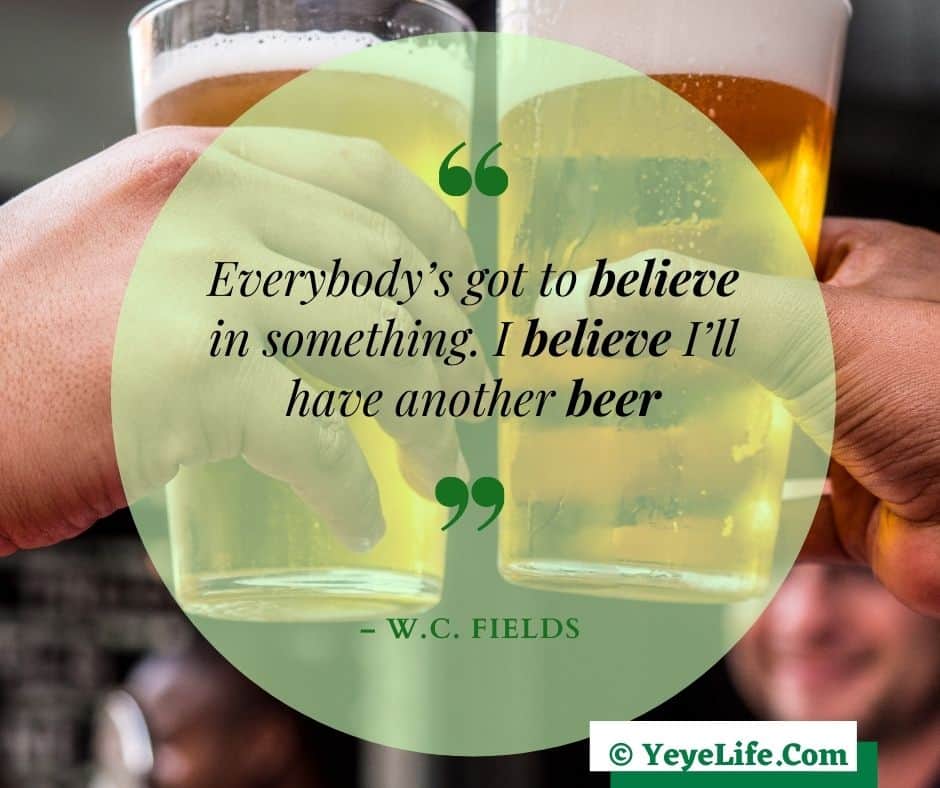 Reality is an illusion that occurs due to lack of alcohol. – Anonymous

Beer is proof that God loves us and wants us to be happy. – Benjamin Franklin

I cook with wine, sometimes I even add it to the food. – W.C. Fields

I feel sorry for people who don’t drink. When they wake up in the morning that’s as good as they’re going to feel all day. – Frank Sinatra

An intelligent man is sometimes forced to be drunk to spend time with his fools. – Ernest Hemingway

When I read about the evils of drinking, I gave up reading. – Henny Youngman

Alcohol may be man’s worst enemy, but the Bible says love your enemy. – Frank Sinatra

Next to music, beer was best. – Carson McCullers

In wine there is wisdom, in beer there is Freedom, and in water there is bacteria. – Benjamin Franklin

Alcohol is the anesthesia by which we endure the operation of life. – George Bernard Shaw

Alcohol removes inhibitions – like that scared little mouse who got drunk and shook his whiskers and shouted: “Now bring on that damn cat! – Eleanor Early

I know a man who gave up smoking, drinking, sex, and rich food. He was healthy right up to the day he killed himself. – Johnny Carson

Time is never wasted when you’re wasted all the time. – Catherine Zandonella

Drinking is an emotional thing. It joggles you out of the standardism of everyday life, out of everything being the same. It yanks you out of your body and your mind and throws you against the wall. I have the feeling that drinking is a form of suicide where you’re allowed to return to life and begin all over the next day. It’s like killing yourself, and then you’re reborn. I guess I’ve lived about ten or fifteen thousand lives now. – Charles Bukowski

Alcohol is necessary for a man so that he can have a good opinion of himself, undisturbed be the facts. – Finley Peter Dunne

I have absolutely no pleasure in the stimulants in which I sometimes so madly indulge. It has not been in the pursuit of pleasure that I have periled life and reputation and reason. It has been the desperate attempt to escape from torturing memories, from a sense of insupportable loneliness and a dread of some strange impending doom. – Edgar Allan Poe

What contemptible scoundrel has stolen the cork to my lunch? – W.C. Fields

If you drink, don’t drive. Don’t even putt. – Dean Martin

To some it’s a six-pack. To me it’s a Support Group. – Leo Durocher

Always remember that I have taken more out of alcohol than alcohol has taken out of me. – Winston Churchill

If God had intended us to drink beer, he would have given us stomachs. – David Daye

Without question the greatest invention in the history of mankind is beer. Oh, I grant you that the wheel was also a fine invention, but the wheel does not go nearly as well with pizza. – Dave Barry

Love makes the world go round? Not at all. Whiskey makes it go round twice as fast. – Compton Mackenzie

I never drink water because of the disgusting things that fish do in it. – W.C. Fields

I drink too much. The last time I gave a urine sample it had an olive in it. – Rodney Dangerfield

Sometimes when I reflect back on all the wine I drink, I feel shame! Then I look into the glass and think about the workers in the vineyards and all of their hopes and dreams. If I didn’t drink this wine, they might be out of work, and their dreams would be shattered. Then I say to myself, “It is better that I drink this wine and let their dreams come true than be selfish and worry about my liver – Jack Handey

The problem with the world is that everyone is a few drinks behind. – Humphrey Bogart

Not all chemicals are bad. Without chemicals such as hydrogen and oxygen, for example, there would be no way to make water, a vital ingredient in beer. – Dave Barry

Laugh whenever you can. Keeps you from killing yourself when things are bad. That and vodka. – Jim Butcher

Work is the curse of the drinking classes. – Oscar Wilde

I went to the worst of bars hoping to get killed but all I could do was to get drunk again. – Charles Bukowski

He was a wise man who invented beer. – Plato

Remember ‘I’ before ‘E’, except in Budweiser. – Professor Irwin Corey

You’re not drunk if you can lie on the floor without holding on. – Dean Martin

There are two kinds of people I don’t trust: people who don’t drink and people who collect stickers. – Chelsea Handler

We were not hugging people. In terms of emotional comfort, it was our belief that no amount of physical contact could match the healing powers of a well-made cocktail. – David Sedaris

I am a firm believer in the people. If given the truth, they can be depended upon to meet any national crisis. The great point is to bring them the real facts, and beer. – Abraham Lincoln

A woman drove me to drink and I didn’t even have the decency to thank her. – W.C. Fields

I began to think vodka was my drink at last. It didn’t taste like anything, but it went straight down into my stomach like a sword swallowers’ sword and made me feel powerful and godlike. – Sylvia Plath

Well ya see, Norm, it’s like this. A herd of buffalo can only move as fast as the slowest buffalo. And when the herd is hunted, it is the slowest and weakest ones at the back that are killed first. This natural selection is good for the herd as a whole, because the general speed and health of the whole group keeps improving by the regular killing of the weakest members. In much the same way, the human brain can only operate as fast as the slowest brain cells. Excessive intake of alcohol, as we know, kills brain cells. But naturally, it attacks the slowest and weakest brain cells first. In this way, regular consumption of beer eliminates the weaker brain cells, making the brain a faster and more efficient machine! That’s why you always feel smarter after a few beers. – Cliff Clavin

There’s too much blood in my alcohol system.

It takes only one drink to get me drunk… the trouble is, I can’t remember if it’s the thirteenth or the fourteenth. – George Burns

I like to have a martini, Two at the very most. After three I’m under the table, after four I’m under my host. – Dorothy Parker

Abstainer: a weak person who yields to the temptation of denying himself a pleasure. – Amrose Bierce

Electricity is actually made up of extremely tiny particles called electrons, that you cannot see with the naked eye unless you have been drinking. – Dave Barry

The hard part about being a bartender is figuring out who is drunk and who is just stupid. – Richard Braunstein

Scotch: Because one doesn’t solve the world’s problems over white wine. – Anonymous

Oh, you hate your job? Why didn’t you say so? There’s a support group for that. It’s called EVERYBODY, and they meet at the bar. – Drew Carey

My friends speak of my drinking…. but they know not of my thirst.

Everybody’s got to believe in something. I believe I’ll have another beer. – W.C. Fields

Here’s to alcohol, the cause of — and solution to — all life’s problems. – Homer Simpson

I’d rather have a bottle in front of me than a frontal lobotomy. – Dorothy Parker

I would rather have a free bottle in front of me than a pre-frontal lobotomy. – Dean Martin

The problem with the designated driver program, it’s not a desirable job, but if you ever get sucked into doing it, have fun with it. At the end of the night, drop them off at the wrong house. – Jeff Foxworthy

Fell in love with a beautiful blonde once. Drove me to drink. And I never had the decency to thank her. – W.C. Fields

I always take Scotch whiskey at night as a preventive of toothache. I have never had the toothache; and what is more, I never intend to have it. – Mark Twain

The only way that I could figure they could improve upon Coca-Cola, one of life’s most delightful elixirs, which studies prove will heal the sick and occasionally raise the dead, is to put bourbon in it. – Lewis Grizzard

All right, brain. You don’t like me, and I don’t like you, but let’s just do this and I can get back to killing you with beer. – Homer Simpson

A lady came up to me one day and said, “Sir! You are drunk,” to which I replied, “I am drunk today, madam, and tomorrow I shall be sober, but you will still be ugly. – Winston Churchill

250+ Be Yourself Quotes and Being Yourself Sayings