5 Tips for Those Who are New to the Vegan Diet 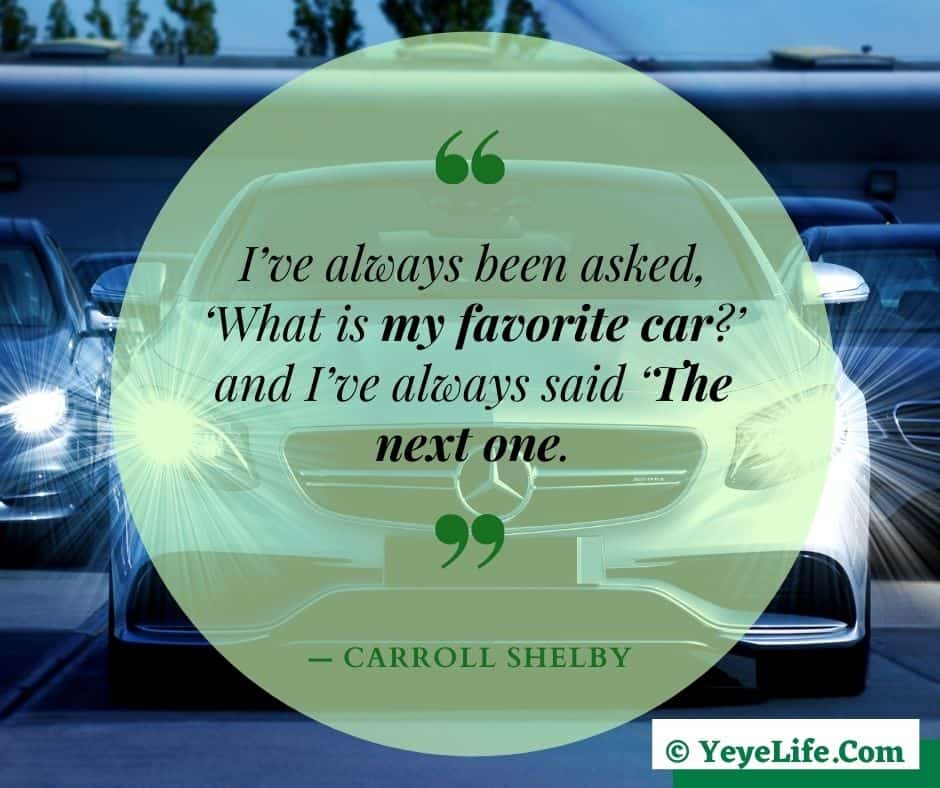 Money may not buy happiness, but I’d rather cry in a Jaguar than on a bus. ― Françoise Sagan

One person’s car is another person’s scenery. ― Jonathan Ive

Always focus on the front windshield and not the review mirror. ― Colin Powell

The fact is I don’t drive just to get from A to B. I enjoy feeling the car’s reactions, becoming part of it. ― Enzo Ferrari

The car has become an article of dress without which we feel uncertain, unclad, and incomplete in the urban compound. ― Marshall McLuhan

I’ve always been asked, ‘What is my favorite car?’ and I’ve always said ‘The next one.’ ― Carroll Shelby

With each replacement of parts, a car slowly becomes Chinese. ― Mr. Kuniyasu

I race to win. If I am on the bike or in a car it will always be the same. ― Valentino Rossi

Any man who can drive safely while kissing a pretty girl is simply not giving the kiss the attention it deserves. ― Albert Einstein

‘Cars’ is simply near and dear to my heart. ― John Lasseter

Environmentalists have a very conflicted relationship with their cars. ― Tom Arnold

I’m not very romantic. My idea of romance is more practical – like washing the car. ― Ty Burrell

If all the cars in the United States were placed end to end, it would probably be Labor Day Weekend. ― Doug Larson

It’s like driving your car. If you drive too fast on the highway, you will topple, so you better maintain your speed. Life is similar to that, and that’s the way you have to control your head. ― A. R. Rahman

It is amazing how may drivers, even at the Formula One Level, think that the brakes are for slowing the car down. ― Mario Andretti

To get to know a country, you must have direct contact with the earth. It’s futile to gaze at the world through a car window. ― Albert Einstein

A car for every purse and purpose. ― Alfred P. Sloan

I think that cars today are almost the exact equivalent of the great Gothic cathedrals: I mean the supreme creation of an era, conceived with passion by unknown artists, and consumed in image if not in usage by a whole population which appropriates them as a purely magical object. ― Roland Barthes

Not having to own a car has made me realize what a waste of time the automobile is. ― Diane Johnson

Never lend your car to anyone to whom you have given birth. ― Erma Bombeck

All of those cars were once just a dream in somebody’s head. ― Peter Gabriel

More books, more racing and more foolishness with cars and motorcycles are in the works. ― Brock Yates

Never have more children than you have car windows. ― Erma Bombeck

If you own a home with wheels on it and several cars without, you just might be a redneck. ― Jeff Foxworthy

Going to church doesn’t make you a Christian any more than going to a garage makes you an automobile. ― Billy Sunday

We all know that small cars are good for us. But so is cod liver oil. And jogging. ― Jeremy Clarkson

A guy knows he’s in love when he loses interest in his car for a couple of days. ― Tim Allen

We’re in a giant car heading towards a brick wall and everyone’s arguing over where they’re going to sit. ― David Suzuki

If you think nobody cares if you’re alive, try missing a couple of car payments. ― Earl Wilson

A car can massage organs which no masseur can reach. It is the one remedy for the disorders of the great sympathetic nervous system. ― Jean Cocteau

The best car safety device is a rear-view mirror with a cop in it. ― Dudley Moore

In the old days drivers were fat and tires were skinny. ― Jose Froilan Gonzalez

Women are like cars: we all want a Ferrari, sometimes want a pickup truck, and end up with a station wagon. ― Tim Allen

Someday we’ll look back on this moment and plow into a parked car. ― Evan Davis

If your car could travel at the speed of light, would your headlights work? ― Steven Wright

It is amazing how quickly the kids learn to drive a car, yet are unable to understand the lawn mower, snowblower and vacuum cleaner. ― Ben Berger

Bicycling is a big part of the future. It has to be. There’s something wrong with a society that drives a car to work out in a gym. ― Bill Nye

The poorest people either don’t have cars or actually don’t drive very far in many cases. ― Joe Hockey

I will build a car for the great multitude. It will be large enough for the family, but small enough for the individual to run and care for. It will be constructed of the best materials, by the best men to be hired, after the simplest designs that modern engineering can devise. But it will be so low in price that no man making a good salary will be unable to own one… ― Henry Ford

In your life, always be like a driver who runs the car not just a car. ― Santosh Kalwar

5 Key Pieces You Need In Your Autumn Wardrobe This Year

Reasons You Should Get Yourself a Cyclocross Bike