4+ Stunning Summer Hairstyles You Must Try This Year 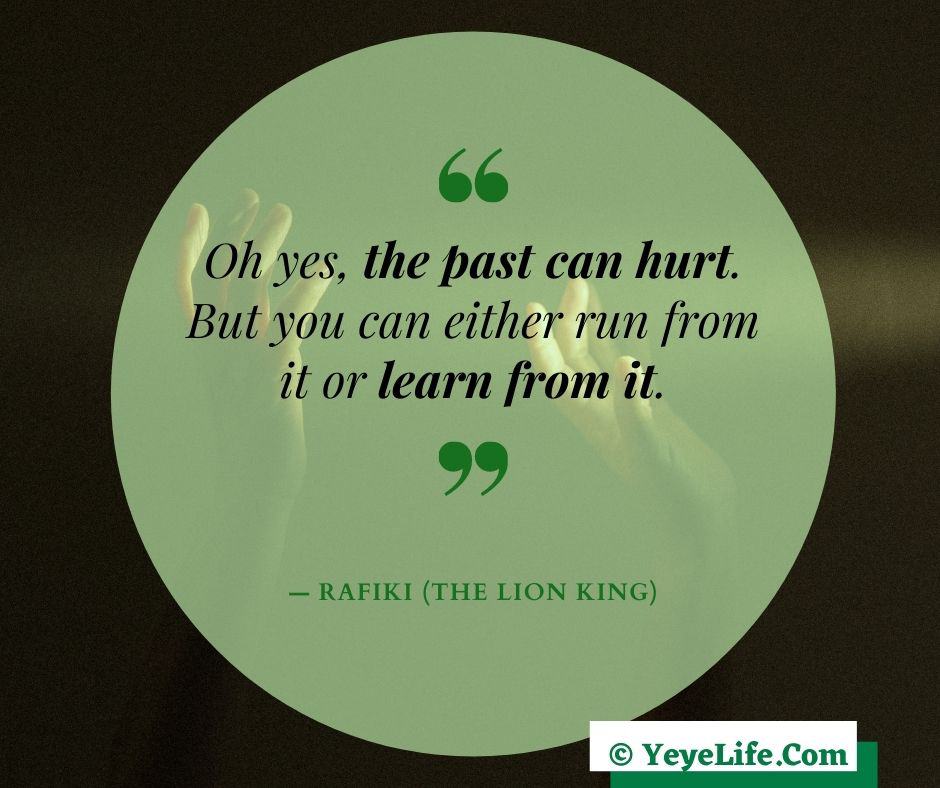 No matter where you go in life there’s always going to be the one person that wants to bring you down, so stay strong and face your problems instead of running away. – Superman

It is not our abilities that show what we truly are… it is our choices. – Dumbledore, Harry Potter and the Chamber of Secrets

Don’t underestimate the value of doing nothing, of just going along, listening to all the things you can’t hear, and not bothering. – Winnie the Pooh

Why are you trying so hard to fit in when you were born to stand out? – Movie “What a girl wants”

Oh yes, the past can hurt. But you can either run from it or learn from it. – Rafiki, The Lion King

I love you. I am who I am because of you. You are every reason, every hope, and every dream I’ve ever had, and no matter what happens to us in the future, every day we are together is the greatest day of my life. I will always be yours. – The Notebook

The truth is… I gave my heart away a long time ago, my whole heart… and I never really got it back. – Reese Witherspoon, Sweet Home Alabama

You’re asking me to be rational. That is something I know I cannot do. Believe me, I wish I could just wish away my feelings, but I can’t. – Darth Vader

The best love is the kind that awakens the soul and makes us reach for more, that plants a fire in our hearts and brings peace to our minds. And that’s what you’ve given me. That’s what I’d hoped to give you forever. – Nicholas Sparks, The Notebook

The greatest thing you’ll ever learn is just to love and be loved in return. – Moulin Rouge

You don’t understand! I coulda had class. I coulda been a contender. I could’ve been somebody, instead of a bum, which is what I am. – On the Waterfront, 1954

It’s no use going back to yesterday, because I was a different person then. – Alice, Alice in Wonderland

Sometimes I wish I had never met you. Because then I could go to sleep at night not knowing there was someone like you out there. – Good Will Hunting

Life moves pretty fast. If you don’t stop and look around once in a while, you could miss it. – Ferris, Ferris Bueller’s Day Off

Remember those posters that said, “Today is the first day of the rest of your life”? Well, that’s true of every day but one…the day you die. – American Beauty

You’re nothing to me until you’re everything. – American Hustle

The truth is a matter of circumstances, it’s not all things to all people all the time. – Captain America: The Winter Soldier

I believe whatever doesn’t kill you, simply makes you…stranger. – The Dark Knight, The Joker

When you decide to be something, you can be it. – Frank Costello, The Departed

Man is least himself when he talks in his own person. But if you give him a mask, he will tell you the truth. – The Fifth Estate, Julian Assange

My name is Maximus Decimus Meridius, commander of the Armies of the North, General of the Felix Legions and loyal servant to the true emperor, Marcus Aurelius. Father to a murdered son, husband to a murdered wife. And I will have my vengeance, in this life or the next. – Gladiator, 2000

When I despair, I remember that all through history the way of truth and love has always won. There have been tyrants and murderers, and for a time, they can seem invincible, but in the end, they always fall. Think of it, always. – Gandhi, Gandhi (1982)

All those moments will be lost in time… like tears in rain. – Rutger Hauer, Blade Runner

Get busy living or get busy dying. – Andy Dufresne, The Shawshank Redemption

Hope. It is the only thing stronger than fear. A little hope is effective. A lot of hope is dangerous. A spark is fine, as long as it’s contained. – President Snow, The Hunger Games

If you figure a way to live without serving a master, any master, then let the rest of us know, will you? For you’d be the first person in the history of the world. – Philip Seymour Hoffman, The Master

Get your stinking paws off me, you damned dirty ape! – Planet of the Apes, 1968

For a guy with a four-digit IQ, I must have missed something. – Limitless, 2011

Now you’re looking for the secret, but you won’t find it, because of course you’re not really looking. You don’t really want to know. You want to be fooled. – The Prestige

To call you stupid would be an insult to stupid people! – A Fish Called Wanda

We all want to help one another. Human beings are like that. We want to live by each other’s happiness, not by each other’s misery. – Charlie Chaplin, The Great Dictator

There’s no place like home. The Wizard of Oz

My tastes are very singular. – Fifty Shades of Grey, 2015

Love cannot be found where it doesn’t exist, nor can it be hidden where it truly does. – David Schwimmer, Kissing a Fool

Don’t let anyone ever make you feel like you don’t deserve what you want. – Heath Ledger, 10 Things I Hate About You

I love the smell of napalm in the morning. – Apocalypse Now, 1979

I don’t regret the things I’ve done, but those I did not do. – Empire Records

My momma always said, “Life is like a box of chocolates, you never know what you’re gonna get. – Forrest Gump

To see the world, things dangerous to come to, to see behind walls, to draw closer, to find each other and to feel. That is the purpose of life. – The Secret Life of Walter Mitty

All we have to decide is what to do with the time that is given to us. – Gandalf, Lord of the Rings: The Fellowship of the Ring

Great men are not born great, they grow great. – Mario Puzo, The Godfather

The stuff that dreams are made of. – The Maltese Falcon, 1941

What we do in life echoes in eternity. – Maximus, Gladiator

Every man dies, but not every man really lives. – William Wallace, Braveheart

Badges? We ain’t got no badges! We don’t need no badges! I don’t have to show you any stinking badges! – The Treasure of the Sierra Madre, 1948

I’m just one stomach flu away from my goal weight. – The Devil Wears Prada, 2006

I know what I have to do now. I’ve got to keep breathing because tomorrow the sun will rise. Who knows what the tide could bring? – Cast Away

I don’t like sand. It’s all coarse, and rough, and irritating. And it gets everywhere. – Star Wars: Episode II – Attack of the Clones, 2002

You drilled a hole in the dentist?! – Denise, Three Billboards Outside Ebbing, Missouri

Being human is a condition which requires an anesthetic. – Freddie Mercury, Bohemian Rhapsody

Dying for the right cause. It’s the most human thing we can do. – Freysa, Blade Runner 2049

Fire. It is a reflection of our own mortality. – Dean Armitage, Get Out

When will the lesson be learned! You cannot reason with a tiger when your head is in its mouth! – Winston Churchill, Darkest Hour

Magic Mirror on the wall, who is the fairest one of all? – Snow White and the Seven Dwarves, 1937

Louis, I think this is the beginning of a beautiful friendship. – Casablanca, 1942

A census taker once tried to test me. I ate his liver with some fava beans and a nice Chianti. – The Silence of the Lambs, 1991

You shall not pass! – The Lord of the Rings: The Fellowship of the Ring, 2001

Round up the usual suspects. – Casablanca, 1942

You know how to whistle, don’t you, Steve? You just put your lips together and blow. – To Have and Have Not, 1944

Pay no attention to that man behind the curtain! – The Wizard of Oz, 1939

Today, I consider myself the luckiest man on the face of the earth. – The Pride of the Yankees, 1942

Mama always said life was like a box of chocolates. You never know what you’re gonna get. – Forrest Gump, 1994

Keep your friends close, but your enemies closer. – The Godfather, Part II, 1974

The greatest trick the devil ever pulled was convincing the world he didn’t exist. – The Usual Suspects, 1995

What we’ve got here is a failure to communicate. – Cool Hand Luke, 1967

This is the beginning of a beautiful friendship. – Casablanca, 1942

Well, here’s another nice mess you’ve gotten me into! – Sons of the Desert, 1933

Elementary, my dear Watson. – The Adventures of Sherlock Holmes, 1929

Of all the gin joints in all the towns in all the world, she walks into mine. – Casablanca, 1942

Listen to them. Children of the night. What music they make. – Dracula, 1931

Listen to me, mister. You’re my knight in shining armor. Don’t you forget it. You’re going to get back on that horse, and I’m going to be right behind you, holding on tight, and away we’re gonna go, go, go! – On Golden Pond, 1981

Tell ’em to go out there with all they got and win just one for the Gipper. – Knute Rockne All American, 1940

Life is a banquet, and most poor suckers are starving to death! – Auntie Mame, 1958

Tips for Caring for Senior Alzheimer’s and Dementia Patients